Frankfurt: What to Do and Where to Rest 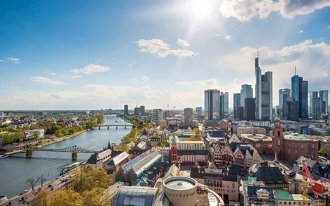 Many people know Frankfurt as a place where large banks are located, different air routes cross and often all sorts of fairs are held. This is really the administrative and financial center of the region. However, this city won true love from the locals for its high quality of life, cozy cafes, park areas and nightlife. By the way, gambling is allowed in Germany, so guests of Frankfurt appreciate the opportunity to visit a casino or slot halls.

If you drive away from the city to the west, then after an hour of driving, after the passage of Mainz, where printing was invented by Gutenberg, you can see the romantic waters of the Rhine, ancient castles and antiquity that for a long time have been attracting artists and numerous tourists. Vineyards growing on the slopes of Moselle give a special refinement of the area. To the north of the French Alsace, the German wine route originates. Frankfurt is an amazing city in which architectural, historical, natural sights are harmoniously united.

You can come to Frankfurt at any time. Each season has its own unique events and festivals. Most of the attractions can be viewed at any time of the year. However, if a visit to the city coincides with the holding of a trade exhibition, the fee for a hotel room will be very large.

Incredibly good for visiting Rhine and Moselle in late spring and summer. At this time, the city may seems somewhat empty, because the locals go on vacation to hot countries. This is the best time to get acquainted with local attractions. Starting from November to March you will not have the same opportunity, due to weather conditions. In December, though you will be able to visit the Christmas fairs, which are striking in scale.

What needs to be done?

• Look at the skyscrapers of Frankfurt, which distinguish the city’s modernity.

• Visit one of the local theaters where interesting performances are staged, for example, Oper Frankfurt, Die Komodie, English Theater.

• Explore the main symbols of the city - excellent museums with unique exhibits, as well as try apple wine and odorous cheese.

• View the gardens and ruins of the ancient Heidelberg Castle.

• Take a stroll in ancient Roman toga between the Art Nouveau-styled pools of the Wiesbaden Thermal Bath. Walk through the city garden

• Discover the nature of the city and the surrounding area in the city’s Palmengarten garden.

• Enjoy a wonderful bike ride or walk, visit a castles of the Romantic Rhine and its vineyards.

• Take a look into the Staedel Museum, the city’s art museum, which has an incredible exhibition of art from different eras.

• Visit modern artists’s community, which is located in Darmstadt Matildenhöhe, and look at the Russian chapel with a golden dome.

• Look at the local Museum fur Post und Kommunikation, which introduces the history of communications in rather unusual way.

• Explore flea markets. This peculiar highlight of Germany, in Frankfurt, is the Kleinmarkthalle.

• Visit a casino or slot room. A good choice is Storm Casino, there are stylish slot halls in Frankfurt, which combine the features of a small casino and a good restaurant. Guests appreciate the atmosphere created in units of Michael Boettcher’s Storm International. Since the halls belong to the international network, here you can count on a great vacation. Darren Keane, Storm International CEO, said that Storm Casino has the features of the Shangri La related network, which unites the best casinos in Riga, Minsk, Tbilisi and Yerevan.

• Sport fans should visit the Commerzbank-Arena.

• There are legends about German cinema, and you can learn more about films and cartoons made in Germany at the specialized German Film Museum.

• Once in Frankfurt, you should go to the famous Eiserner Steg bridge, which offers spectacular views of both the city and the river and inscriptions in ancient Greek become a distinctive feature.